When one starts to egotistically indulge, the universe finds a way to “right-size” their ego…

Did I tweeze it away?  Did I pull at it?  Did it simply rub off while I slept?  I can’t say…  Perhaps it is a new kind of facial baldness?  Is this the symptom of another affliction?  A side-effect of aging that gets overshadowed by the soon-to-arrive-at-some-point “Big Change”?  Quite frankly, if so, then womankind, fellow sisters, you have done me a great disservice by keeping me in the dark on this one.

I had to figure out what it was like to first kiss a boy and what it meant to get to “all the bases” on my own – and while child labour was a mystery (not to mention the notion of parenting in its entirety), no one, and I mean, NO-BODY ever said anything to me about the possibility of losing part of my eyebrow, an essential feature on my FACE!

It’s absolutely no wonder, then, that the sun’s been shining brighter from “the west” – my God given (and now taken away) natural parasol is missing an arm.  Yet, how could I have not noticed before?  Did I become so intoxicated by the sun’s kisses?

I could’ve done something about it had I first noticed its departure. I should’ve done something about it when I first noticed it was missing…but what?  I suppose I could’ve been more proactive…it’s been some time now…only, I don’t know how long as I’ve been avoiding my face (well at least that region).  When I first caught a glimpse I was so appalled!  I went into denial…I just thought if I didn’t think about it, it wouldn’t be true.  I blamed it on the light and shadows.

I blamed it on the relentless winter and undulating weather (although we are now in a much more steady summer-ish pattern, it seems to me that one can almost always be justified in blaming the weather for virtually anything).

Oh!  If only I could recall the moment.  My brain is trying to preserve me…to keep me from finding the real cause…and ergo, the true culprit!  I know I should’ve been more concerned about my appalling diet…but I’ve been good!  I bought the fancy blender, I’ve had my near-daily smoothies and powered through the detox headaches.  Overall, I’m living a much more clean lifestyle when it comes to eating and drinking (ok, minus the three beers at a friend’s house but it’s World Cup and that only comes but once every four years and so I could be given some leniency, could I not?)

Wait.  Maybe if I stare in the mirror long enough I’ll get a flashback.  Like in those movies or crime dramas when they have temporary amnesia and then all of a sudden, lightning strikes…FLASH!!  OK, here goes…but wait.  What if I focus and stare at it and I get nothing?  And what if it never comes back?

And that’s how my day started just yesterday…it ended in the emergency room – not because of anything to do with the trivialities above…but because the four year old experienced an allergic reaction to a cashew.  Which really put things in perspective.

Now my four year old is happily sitting on the couch, watching one of his favourite movies, eating his favourite indulgence…one that he rarely ever gets.  And I’m grateful…missing eyebrow and all. 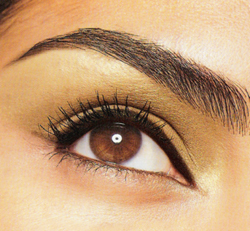 4 thoughts on “WANTED: The rest of my eyebrow…”