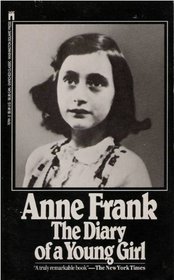 When I first read The Diary of Anne Frank, I couldn’t help but place myself in Anne’s shoes because her story, while so relatable to me as a young teenager, was also incredibly haunting and tragic.  I could relate to her awkwardness around romance and friendships, to her sometimes easy and at other times trying relationships with her mother and sister, and her love of Hollywood.  My awe of her also made me wonder about what it must have felt like to be an outcast, to have to go into hiding, to take such great lengths to survive only to end up dying in a concentration camp mere weeks before liberation and just shy of a sixteenth birthday.

I have read and reread the book over the years and each time, I sadly laugh at her antics, my heart swells when she finds companionship with Peter (the son of the other family in hiding), I grow tense and uneasy with every close call of discovery and then I’m horrified when I reach her final entry – the following line in particular:

“I’m what a romantic movie is to a profound thinker – a mere diversion, a comic interlude, something that is soon forgotten: not bad, but not particularly good either.”

Somehow her story always seemed unfinished.  Each time I’ve read the book I’ve looked for missed clues or hidden passages as my mind simply can’t accept such an abrupt end to this enigmatic yet relatable person.

Despite her teenage angst and feelings of insignificance (who, after all, hasn’t experienced the same during their teenage years?) Anne Frank is one of the most recognizable “survivors” of the Holocaust, even though she, herself perished.  Her story has left an indelible impression on millions, but for me, I’ve always felt a connection to her optimism and faith in the face of real adversity.  As an Armenian and a descendant of genocide survivors still hoping for justice, I can relate to that optimism…that faith.  But as a teenager, little did I realize that my connection to Anne would be greater than I could have ever imagined…

When the Armenian Genocide began in 1915, one of the earliest measures by Ottoman Turkish authorities was to collect the men in all of the villages and kill them.  Notable politicians, businessmen, and the intelligentsia were rounded up and murdered – including my great-grandfather who was hung in front of his pregnant wife and four children.  His only crime was that he was a successful Armenian businessman living in Ourfa, a province in Ottoman Turkey which was nearly homogenously Armenian.

While my great-grandfather had likely not foreseen his brutal death, he had made the necessary preparations should the family be faced with any unforeseen danger.  His plan hinged on the willingness, courage and integrity of his Turkish business partner, Haji Khalil.  Haji Khalil had promised my great-grandfather that he would take care of the family in the face of disaster and when disaster struck, he stayed true to his word and housed seven members of my family, including Azniv, my maternal grandmother, in the upper storey of his house for a year, unbeknownst to Ottoman authorities.

Haji Khalil cared for my family’s basic human needs by providing food once a night (which would have to last until the next day) and allowing them to bathe by arranging for his two wives and servants to be absent from the house once a week.  When two of my relatives passed away, Haji Khalil even buried them in secret.  Despite the immense potential risk to his own well-being, and that of his own family, Haji Khalil made good on a promise that he had made to my great-grandfather, an Armenian, and thanks to him, I am here today.

When I learned of the Armenian Genocide, I was quite young.  The documented photos of the atrocities were extremely disturbing but the images that my mind would conjure based on the words I would read about this dark and horrifying period of my people, were even worse; the slashing of pregnant womens’ bellies, young Armenian girls throwing themselves and their children in the Euphrates to escape rape, mutilation and captivity, the slow starvation on the death marches.  Speak to any Armenian today, and they will have a story for you.

My paternal grandmother’s story is more typical.  Her father had been killed like most of the other men in her village.  Ottoman Turkish authorities then came to evacuate my grandmother’s family and when my great-grandmother stopped them from entering her home, they killed her.  Luckily, my great-aunt had been visiting that day and she grabbed my grandmother, her older sister, her newborn baby brother and fled from the back door of the house, unbeknownst to the authorities.  During the marches, the Turkish soldiers became aware of the gold that my great-aunt had hidden in her clothes so they attacked her and as a result, it became my grandmother’s job to carry her newborn brother.  At one point, Esther, my grandmother, had carried the body of her dead baby brother for two days during the death marches in the mountains from Erzerum to Marash in Turkey not realizing that he had died from malnutrition.  It was a group of older women that informed her that he had passed and at just four or five years old, the same age as my youngest son in junior kindergarten, she buried her baby brother on the side of the road under twigs and some rocks.  She was not as fortunate as Azniv – there was no Haji Khalil to save her family.

On the one hand I’ve always felt anger that my ancestors were subjected to such immense and cruel suffering simply because they were different – as Armenians, the lives of my ancestors had no value.  That the Ottoman Turks could commit such a horrific act, such a crime against humanity, genocide, vilified them to me.  On the other hand, there is the story of Haji Khalil.  A righteous Turk, without whom, my own mother would not be here today – for that matter, neither would I.  I owe him my life.  This dichotomy has always been challenging but it has allowed me to stay strong, to demand justice and to have hope and faith that the people of a nation with a dark past, are capable of taking steps towards recognizing and taking responsibility for past faults and allowing two nations to move forward.

While Anne Frank’s father’s business partner had been like a Haji Khalil to Anne and her family, her salvation would not come and her life would end in tragedy.  Unlike Anne, my grandmother and her family were not discovered and instead, the efforts of Haji Khalil allowed her to avoid death marches and concentration camps. Unlike Anne, the efforts of Haji Khalil allowed my grandmother to have a sixteenth birthday and to have a full and complete life surrounded by her mother, her children and grandchildren; she was able to pass along stories and traditions herself rather than through a diary.  My grandmother passed away 10 years ago, in April 2005, just shy of the 90th anniversary of the Armenian Genocide.  On this centenary, I think she would be proud that my own faith and optimism are still intact as I do my own part in seeking more Haji Khalils…