This week I have thought a great deal about the never ending battle of the sexes…and I’ve concluded, women win.

We survive continuous changes from puberty to our death, and we do it in stride!  Women are reminded virtually every 28 days of a “weaker state” yet we overcome.  We can bear another human being.  We can go through “the change” and still come out the other side while physiologically, the greatest challenge a man has is his daily routine of shaving a beard.

Now I’ve completely distilled it.  I’ve used a trump card that can’t be beat.  I realize this may be fighting dirty but I know I’m right.  For this week I have endured.  I have lasted.  I have won.

I have been ruminating about the battle of the sexes because I’ve been surrounded by two, very feverish children with undulating colds and a very ill Mr. Niceguy, poor, sweet Mr. Niceguy, who has been in a state of malaise.  And at every turn I have been met with one runny nose or another and the fear that every surface is contaminated with germs and so I must guard not to touch, sit, eat, smell or even look at anything!  Still, after a very extended weekend in our virus-laden house, I have endured.  I refuse to succumb to the illness that has gripped every male person in my household.  And I have concluded, it must be because I AM A WOMAN!!

I am told, women have stronger immune systems and we eat better, are neater, better at organizing, etc.  Surely that can’t be the only claim to superiority?  No.  The battle between the sexes has been raging through the ages and here’s how an article in the Mirror begins:

Men joke that women can’t parallel park, women say men have all the emotional intelligence of a plank of wood… 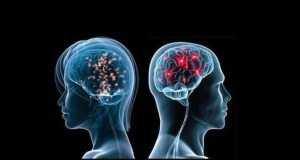 The article actually does go on to cite that Scientists at the University of Pennsylvania found unique differences in brain connectivity between males and females:  male brains are structured for perception and coordination (like ducking if a ball was being thrown straight at them) while the female brains are wired for coordination between analysis and intuition (like examining evidence in a high profile crime case and knowing when your client is lying to you).

Essentially, we are two different species when it comes to how our brains work.  But like the article asks, who’s best?  I’m quite certain it will (unjustly) be a tie…

From the standpoint of intelligence – women win.  They have been scoring higher and higher scores on IQ tests and likely that is due to the fact that we, as women, have had to deal with greater complexities in the last century such as juggling family life while building a career.  Male brains are also adapting to the faster moving modern world, however not at the same pace as women’s.

Women also win when it comes to medicine – female doctors are said to be more cautious in that they order more vital tests, more likely to prescribe the right drugs and essentially, are less likely to tell a patient to swallow two Tylenols and call back in the morning.  I can’t say I’m one to speak on this as I’ve known great male and female doctors…but yay, another point!

We know women are great multitaskers – after all, they have to be.  And this may be an unfair challenge, but take it from me, as a woman, sometimes I wish multitasking was not an inherent, ingrained requirement.  Having said that, we win.    We are superfast at making dinner, doing homework, paying bills, writing up proposals and preparing lunches for the next day…ALL AT ONCE.

What I didn’t know, and was so happy to read about, is that we make great bosses – this is because I am bossy and now I have validation.  Truth is, however, that female bosses are fairer and make decisions that are more likely to benefit all stakeholders (also, if you don’t believe me or the Mirror, the International Journal of Business Governance and Ethics found that female-influenced companies are generally more successful than those dominated by men).  Hear that?  Stand up women and let’s take over the world!

Here’s where we lose: at throwing, driving (WHAT?!), sleeping (no surprise) and at boozing.  Hmm…so what if I can’t throw a ball like Blue Jays’ pitcher, R.A. Dickey?  And ok, apparently men’s brains are better than women’s at visualizing 3D images which helps when it comes to parallel parking – I would like to add here that I am the QUEEN of parallel parking, even with my oversized Mom-UV!  Truth is, in general, I do have to agree with this one.  And sleeping – why of course men are better.  Remember that multitasking thing?  That doesn’t just shut off because it’s 11pm and time for bed…  And as for boozing.  I had to laugh – I am the cheapest date!  Apparently it’s because men are full of more water and so do a better job at metabolizing alcohol.  So touché, besides, I’m full of more brains…

So that’s it and just as I predicted – 4 to 4.  But is this really an even split?  I mean, can we weight these?  Surely intelligence must count for more than throwing?  Unless of course you had to “throw” a lasso to swing yourself out of a burning building?  But dare I ask, how would you know whether a lasso would be the thing to throw if it were not for intelligence?  Am I being too petty?

Uh-oh.  What’s that?  *cough, cough*  My throat is feeling scratchy.  My eyes are tearing up and watery.  Oh…I feel so tired, my body hurts, my head hurts…oh no!!  Can it actually be a TIE?