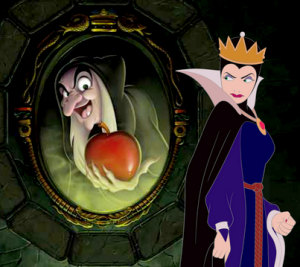 Mirror, mirror on the wall, who’s the fairest of them all?

These words haunted me most of my childhood – my fear held me captive to the Queen in Snow White because even at that very young age, I think I always knew that she and I had a common connection…

Growing up, I would spend hours in my mother’s closet:  my mom grew up in the “Paris of the Middle East”, also known as Beirut, Lebanon.  There, she had dresses made for her for virtually every outing, the most fashion forward shoes, handbags and accessories, and of course, the ultimate makeup trousseau.  So while she would be cooking in the kitchen or socializing on the telephone, I would sneak into her room to play dress-up and try on her makeup.

My mom taught my sister and me to take care of ourselves.  Unfortunately, while I was a “closet princess” and very much appreciated watching her use the amazing palette of 30 eye shadows, I was still very much a tom boy, just as she had been.  My mom was incredibly patient with us – she encouraged us to play with cars, engineering sets and lego – but she knew it was important to pass on some “feminine lessons”.  My dad, on the other hand, who I think was appreciative that we were two of the most rough-and-tumble girls, did, I believe, express some frustration at one point when I walked in from my grandmother’s garden covered in thorns after falling into a rosebush, with scraped hands and knees for the umpteenth time and exasperated, he exclaimed, “If you’re not careful, no man is going to want you covered in all these scars!”  I recall replying with, “well, then I don’t want that kind of man!”  But in growing up, I’ve come to learn that looks are very important, indeed, and I’m not just referring to beauty.

Looks are the initial little appetizer – a certain something that draws one in, repels or causes query.

I can best describe the above by referring to art.  A watercolour by Monet evokes a sense of peace and calmness.  While perhaps a Salvador Dali may cause one to scratch their heads.  But a recent appearance of a “little friend” on my chin that likely would qualify for its own zip code, turned me from a Van Gogh to a disjointed Picasso and I felt, did more to unleash parts of my psyche long buried putting me in company with that very evil Queen…

See, a few nights ago I started to feel that familiar pressure on my chin…I had so many “appearances” to make over the course of the weekend:  birthday party, Kung Fu lessons and socializing with parents, a long overdue girls’ night, and a long list of other endless gatherings.  And when I woke the next morning, one look in the bathroom mirror and there it was:    my very unwelcome “friend”!!   I just wanted to hideout – no amount of concealer would do!  Spackling it on only made it look worse!  And the thought of buying zit cream at the drug store like in my angst-ridden-teenage-years seemed like the worst option of all!  Hot compresses, cold compresses, windex, hydrogen peroxide…would nothing return me to my normal state?

So at each occasion I could feel “my friend” taking centre stage – I tried desperately to conceal it with my hand – but then I looked like a crazy person rubbing an imaginary beard or one that was highly philosophical:  “Hmmm…yes…I agree with what you’ve said but what would Emmanuel Kant say?”

During my conversations I sensed that my friends were not listening to my words but staring (mouths agape) at my chin – and lo and behold, this “friend” of mine was transforming from simple red bump to Everest!!)  I could hear the words of Austin Powers in my head, “Mol-ee, mol-ee, mol-ee” and I wanted to withdraw…to fade into the wallpaper.

But I am not the type to withdraw for too long.  Anger welled up inside of me – one that surely the Queen must have felt.  For this friend had caused me to abdicate my throne.  And while I’ve never considered myself as worthy of a spread in Vogue, I have grown quite accustomed to the predictability of my looks – now reduced to repulsion and query.  Why do looks have to matter so much?  Why can’t my words be enough?  And if looks are the appetizer why do I have to dish out the appy that like an oozing, slimy delicacy, raises the eyebrows and garners repulsion and query???!

But, like all of my over-dramatizations (and the weekend), this too, came to an end…and fortunately, one that was timely.  Perhaps next time I’ll remember not to put too heavy a weighting on my first impressions…