Earlier this evening, Mr. Niceguy was preparing dinner – once again relieving me.  And I think mostly because I’ve been subjecting the family to fat free, low cal, protein and veggie rich fare which totally goes against his constitution.  That, and I’m officially off pasta (at least, most of the time…ok, as best as I can…all right I limit it to no more than two intakes a week unless there’s leftovers and well, then, it’s just wasteful if you don’t finish things off).  And Mr. Niceguy, like most guys I know, LOVES a meaty, hearty, saucy pasta.

We decided that two dinners would be better as I had indulged a little during the afternoon siesta with some salt and vinegar flavoured ‘chackers’ (part chip, part cracker?) so while he prepared his hearty pasta for himself and the boys, I prepared a nearly fat free  egg white and veggie omelet in my new, white ceramic non-stick pan.  And while dicing the veggies I blurted, “Oh wow.  Tomorrow’s this guy’s birthday that I used to have a massive crush on when I was 17!  I wonder what he’s up to…”

And I thought to myself – if similar words had come out of Mr. Niceguy’s mouth things would’ve gotten pretty ugly tout suite…and therein lies the inherent double standard.

I find men and women to be very different on this point.  And before I offend my kind, I’m just putting it out there as it is…for me…and if many a woman’s willing to admit it….probably for you too.   As a woman, there is nothing more off-putting to me than the walk down memory lane about the relationship that never was with the girl that was just too cool or just a snick out of reach.  That perfect girl next door, or perhaps that exotic exchange student.  The girl who was just so laid back and effortless.

On average, it takes me at least 20 minutes just to get going in the morning.  Up, a quick surf on the iPad (I have an addiction which may be the subject of another entry someday), run through outfits in my mind (black top, short skirt?  Too tarty for work…grey pants and white shirt?  Too dull.  Sweater dress with stilettos?  Hmmm….just the right blend of daring and demure).   Then comes the debate about washing or not washing my hair, full make up or natural look (both take the same amount of time…don’t kid yourselves and when you get to my age…there’s no such thing as truly au naturel), and then on to the jewelry…

I guess what I’m saying here is that I’m totally high maintenance and as laid back as I may seem about certain things – like I’m a hamburger and French fries kinda gal over a fancy four-course meal – there’s no way I would ever consider myself “easy-going.”

At best, I’m diplomatic with a dash of crazy.

So when conversations about the past come up, I have a very predictable response:  at first, I’m easy going, effortless and laid back.  But it doesn’t take long for the crazy to come out…

Me:  “So, umm….tell me about your university days…how many serious girlfriends did you have?”

Me:  Getting slightly hot under the collar.  “What do you mean you can’t remember?  Think…first year?  Anyone caught your eye?  Or when you were graduating?  Anyone you thought you’d take the plunge with?”

Mr. Niceguy:  “Well, there was that girl in high school that I also dated while I was in first year.  I think she became a doctor.”

Me:  Interrupting – “Really?  Who?  That girl with the dark hair?  A doctor?  Was she even good looking?  Did your parents meet her?  Did they like her?  What did your friends think?  Did you think you were going to marry her?  What was so great about her?  Did she hang out in your dorm room?”

Mr. Niceguy:  “Well, we didn’t last.  And after her…well, I can’t really recall.  There were some girls…but not any really serious girlfriends.”

Me:  Internally screaming, WHA???!!!!!!!  “Oh, that’s nice.  Ya…who would want to get serious during university?  I mean, sheesh, I would tell our boys not to get too serious too…”

Mr. Niceguy:  “Well, there was that one girl.  The ballet dancer.  I met her during a school trip.  I always wondered about her afterwards…”

Me:  HMMMPPPFFF.  Why did I start this conversation??  A ballet dancer no less…  “Well, if it means that much to you, you should just look her up and see what happened.”  Maybe she put on 60 pounds and drives a school bus!

So what happened right after I uttered those words while cooking side-by-side with Mr. Niceguy should come as absolutely no surprise:  nothing.  Silence.  And a smile while continuing our efforts to get dinner on the table.  Plus the realization, on my part, that perhaps next time I could extend the same kind of courtesy to Mr. Niceguy and not poke and prod him into revealing things that are perhaps better left unsaid…but then where’s the double-standard in that? 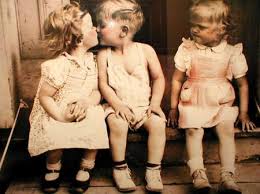