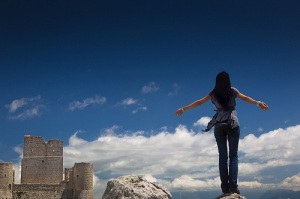 Every time I buy a lottery ticket…I get the chills.  Like I know THIS is the winning ticket.  This time, they’re going to talk about me, the nice girl from Toronto, mother of two sweet boys, financial advisor, married to Mr. Niceguy, as the winner of the largest jackpot in the history of the lottery.  I’ve even gone so far as to buy a ticket from a small, northern Ontario town with the hopes that I will have won because after all, most of the winners did not buy their lottery ticket at Bay and King.  Chances good?  Chances great!  And I dream of what I’d do with all my winnings…

Truth is…I hardly ever buy lottery tickets.  Which makes this fantasy all the more real for when I do, it’s because “something” compelled me to buy that lottery ticket.  (The most I’ve ever won was $20 and I’m just really hoping that I didn’t peak at 20 bucks…’cause that would suck.)

No matter.  It turns out the start of fall is also the start of McDonald’s Monopoly!!  And before you judge, YES, I LOVE McDonald’s.  I’ve never been a Big Mac combo kind of girl…but a drive thru giant Diet Coke with some small fries…ah, they hit the spot!  And what about piping hot chicken nuggets?  Yummm…and look, it’s not like I’m clueless about chemical contents, preservatives or genetically modified excuses for food but there’s just something about them!  It took me all of 5 minutes to get over being perplexed when they announced, “Chicken nuggets, now with white meat.”  Five minutes and just one bite of those finger lickin’ good nuggets…oops, sorry, wrong chicken product.

In any case, just this Saturday morning, for fun (ok, sheer laziness as I was all alone while Mr. Niceguy ran another obstacle course yay, Mr. Niceguy, boo single parent with two hyperactives for 12 hours) I took the boys to the local McD’s for breakfast and who knew we would end up with 10 monopoly stickers?!  TEN!  Surely I would be a winner…or on the path to “winningdom”?

It took every ounce of control for me to NOT order another round of breakfast (I asked and they promptly replied, “we’re full!”…also, my rationale kicked in and I figured we could always come back for lunch, or dinner…maybe both… (Don’t scoff!  We didn’t!)

So what is this feeling, inherent, deep within, that drives this belief?  Is it just that the world’s my stage and I’m the main character?  Or am I the underdog that everyone’s rooting for to succeed?  Is it just that all of my various trials, tribulations, heartaches, trials, and tribulations (not a typo, worth repeating) must have EARNED me the-something-special.  Must have made me deserve the spotlight, the reward, the recognition!  (My name will be in lights!!!!)

Is it wrong to have hope?  Is it fallacy to believe in destiny?  Is it silly to think that our guts may actually be telling us something other than “you’re hungry” or “hurry up and find a toilet”?  Isn’t it true that sometimes, you just know?

Speaking of just knowing…it’s like paths.  And everything happens for a reason.  Or should we just go with,

The Huffington Post just recently posted an article called, “Why Generation Y Yuppies are Unhappy” and in it, refers to a fictitious person named Lucy, a GYPSY – Generation Y Protagonists & Special Yuppies – a type of unique yuppy that thinks they are the main character of a very special story.  YES, YES I say!  Lucy is me!!  But there is a catch, GYPSYs are unhappy because they are extremely ambitious and have huge (unrealistic) expectations fuelled and taunted by peers who embellish their own realities.  Add to the mix some serious entitlement issues and an over-inflated view of oneself…and therein lies the frustration which arises due to said unmet (unrealistic?) expectations.  So what is a Lucy to do?  The article suggests staying wildly ambitious, ignoring everyone else and stopping thinking that you’re special.

And here’s what I say.  I AM SPECIAL.  I’m going to keep dreaming, keep hoping, and keep wishing.  True, now more than ever we can see what someone else has, what someone else has accomplished, and perceive what someone else deserves…and this “Keeping up with the Joneses” may be the cause for one or twelve of my bouts of anxiety or funky blues lately.  But I herewith, forthwith, from now forward will NOT be reduced to a Lucy.

What I truly want is really out there…I just have to be patient and find it.  And I. WILL. HAVE. IT. ALL.  It’s just the “ALL” that needs to be defined.  Now, how about a McNugget combo…like I said, I’ve got Park Place if you’ve got Boardwalk!

PS:  Here’s the link to the article in the Huffington Post – http://www.huffingtonpost.com/wait-but-why/generation-y-unhappy_b_3930620.html

12 thoughts on “I’m a GYPSY…and the sun revolves around ME!”